This year was the first year that I participated in our annual Family Literacy & Math Night, and I do have to say it was a great success!  I have some great teammates, and when we all work together things happen! 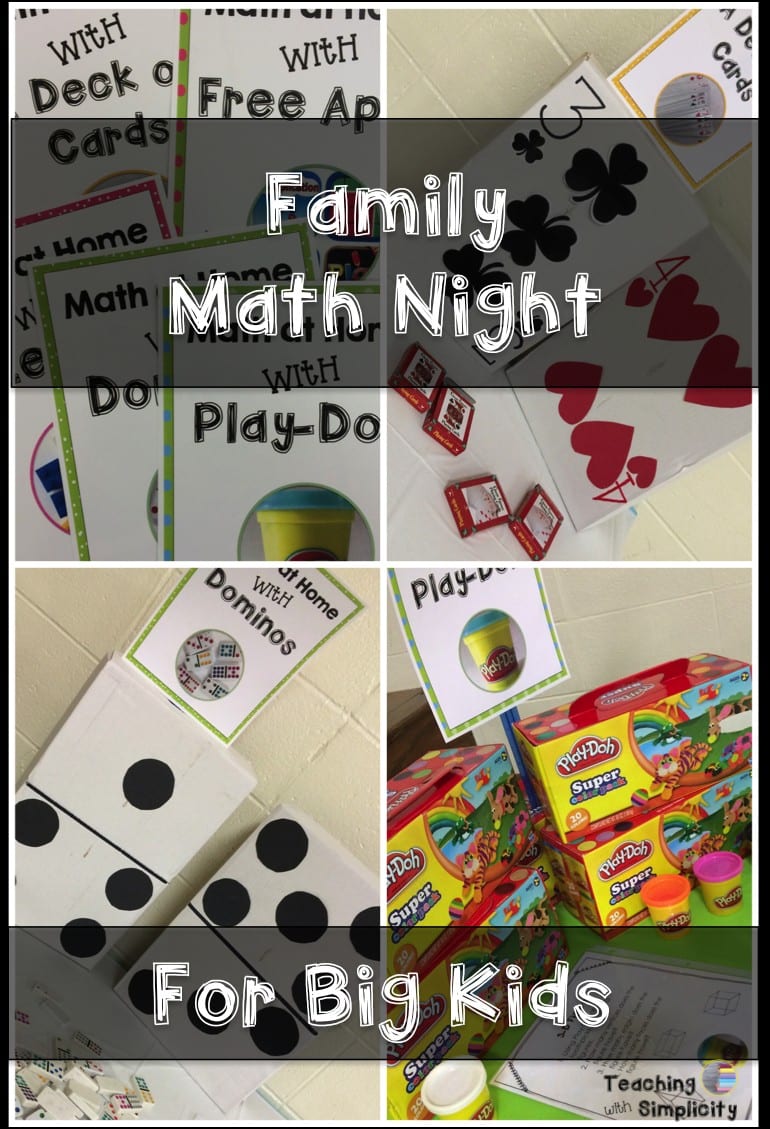 When putting together the activities I had a couple of objectives that I wanted to cover, and I called it “Math at Home”  First, I wanted to create hands-on-activities that students could do with common household items.  Lots of kids have cards, dominos, Legos, and/or Play-Doh at home.  They were shown how these common items can be turned into math games.  My second objective, was to send them home with something tangible.  I chose Play-Doh! Who doesn’t love Play-Doh?!?!  I found a pack of 20 on Amazon for $11.00, cheap enough I think.  So, each student went home with their own can of Play-Doh and ideas for math!

There were five different stations that students rotated to with their parents.  Each station included manipulatives and directions for playing.

Math at Home with Legos

This station had a game called “Linking Legos”.  The station included Legos, grid paper, pencils, and directions for playing.  Students found the area and perimeter of the Legos that they sketched. 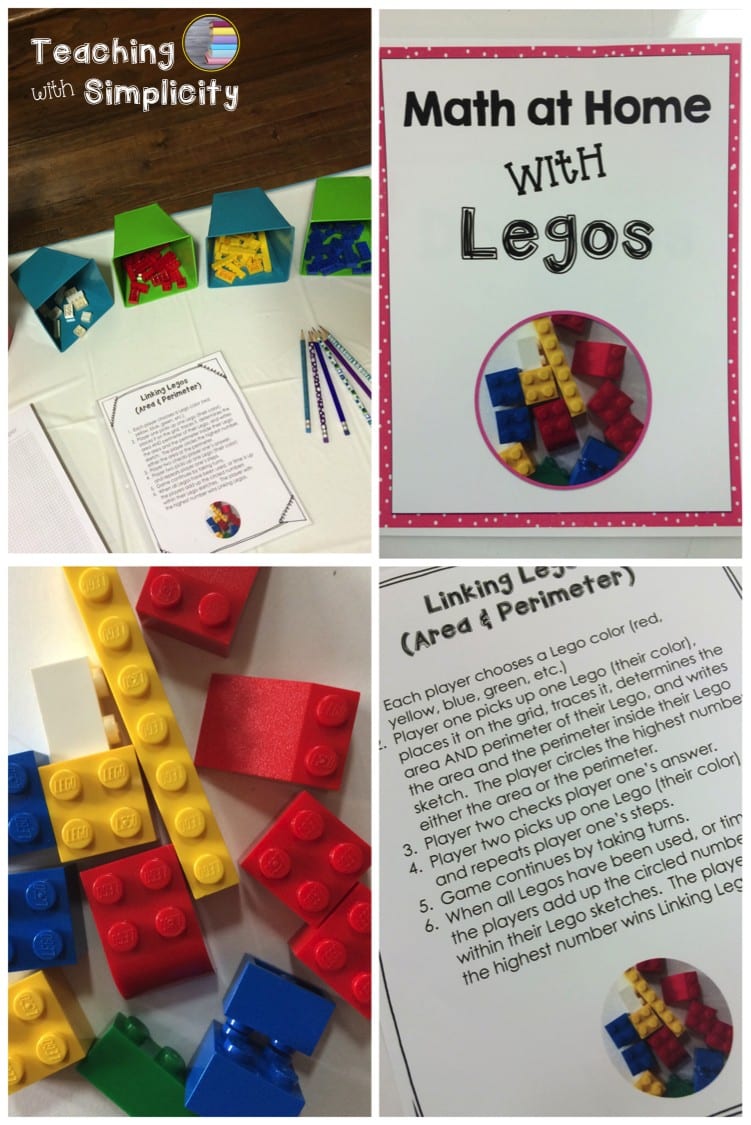 Math at Home with Free Apps

This station had two tablets with free apps related to math.  Students could explore the apps while practicing fractions, multiplication, and geometry. 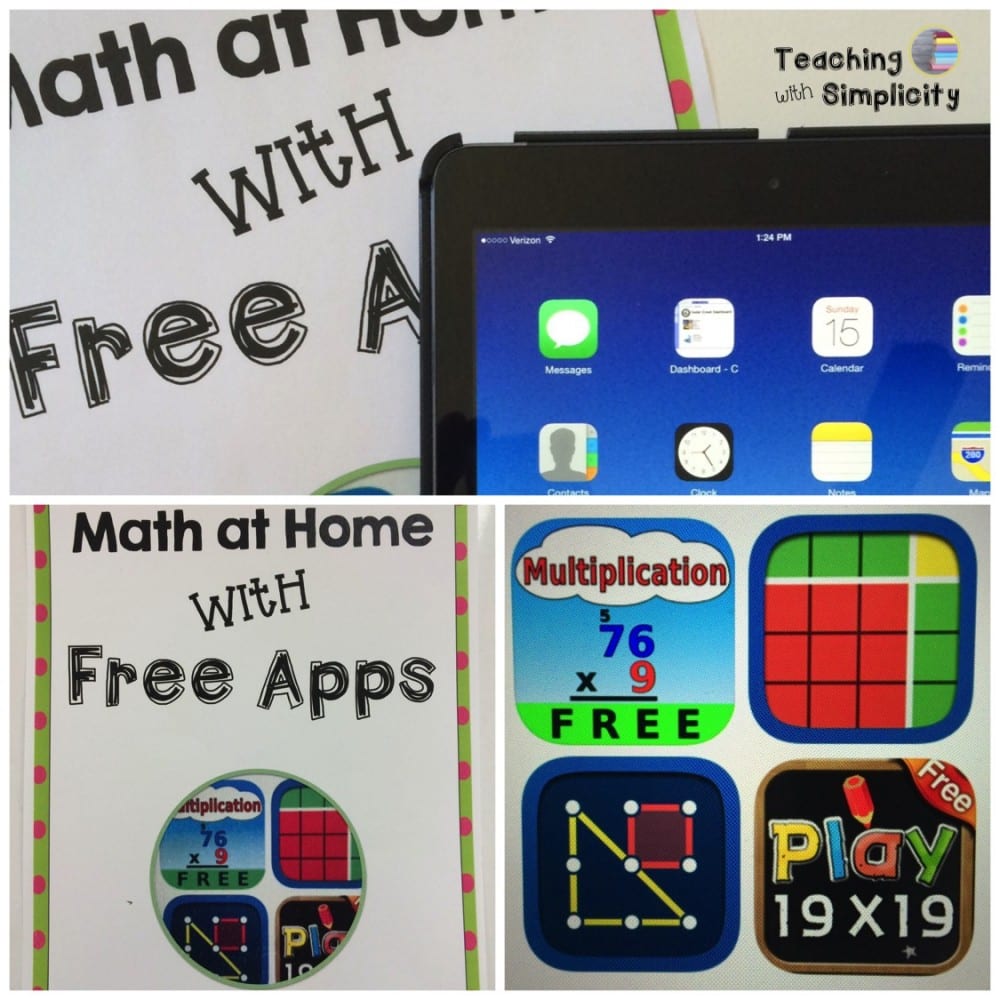 Math at Home with Play-Doh

This station was by far the most exciting for students!  The station had Play-Doh, toothpicks, and 3-D figures for students to use as examples.  Each student chose a can of Play-Doh of their choice.  They were to create 3-D shapes using the toothpicks as edges and Play-Doh has vertices.  When they were finished creating their figure, they could take the figure with them and their can of Play-Doh. 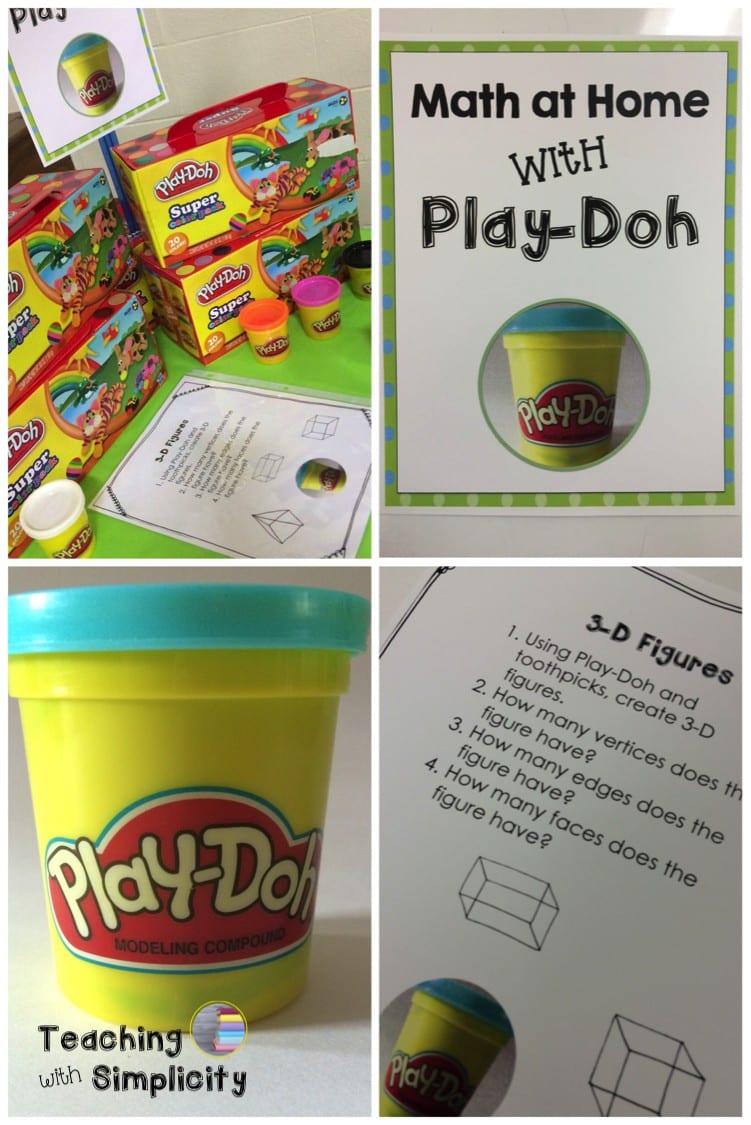 Math at Home with Dominos

This station included dominos and directions for play.  This game was titled “Domino War”.  With partners, students multiplied the dots on either side of the domino together to find a product.  The student with the largest product won the game. 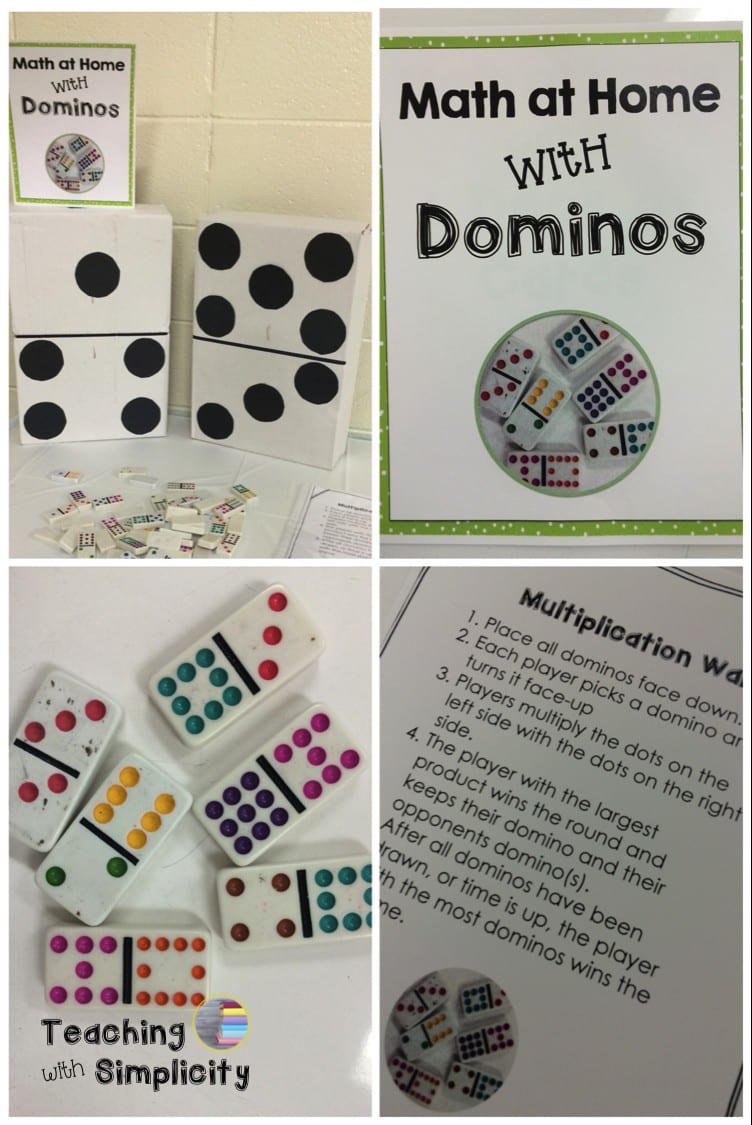 Math at Home A Deck of Cards

This station contained a deck of cards and directions for play.  The game was called “Battle of the Fractions”.  Students drew two cards.  The largest card was the denominator, the smallest was the numerator.  Students compared their fractions, and the greatest fraction won the round. 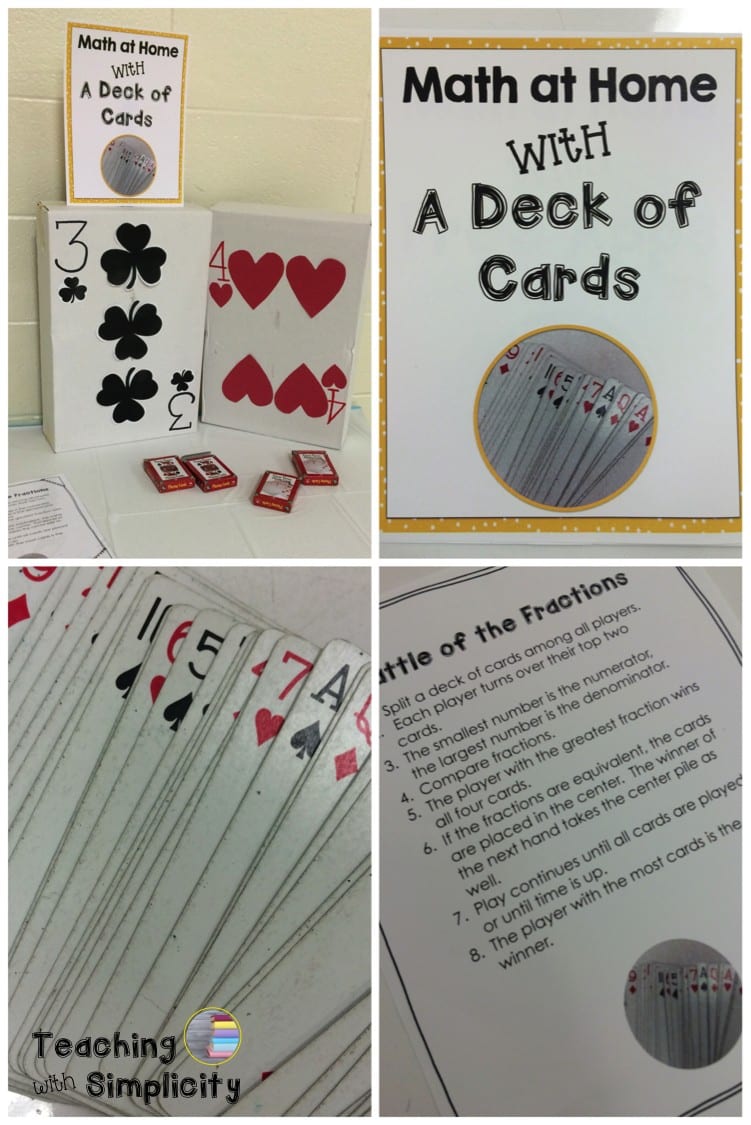 I also created a flyer that included the directions for each activity so students and parents could refer  to at home. 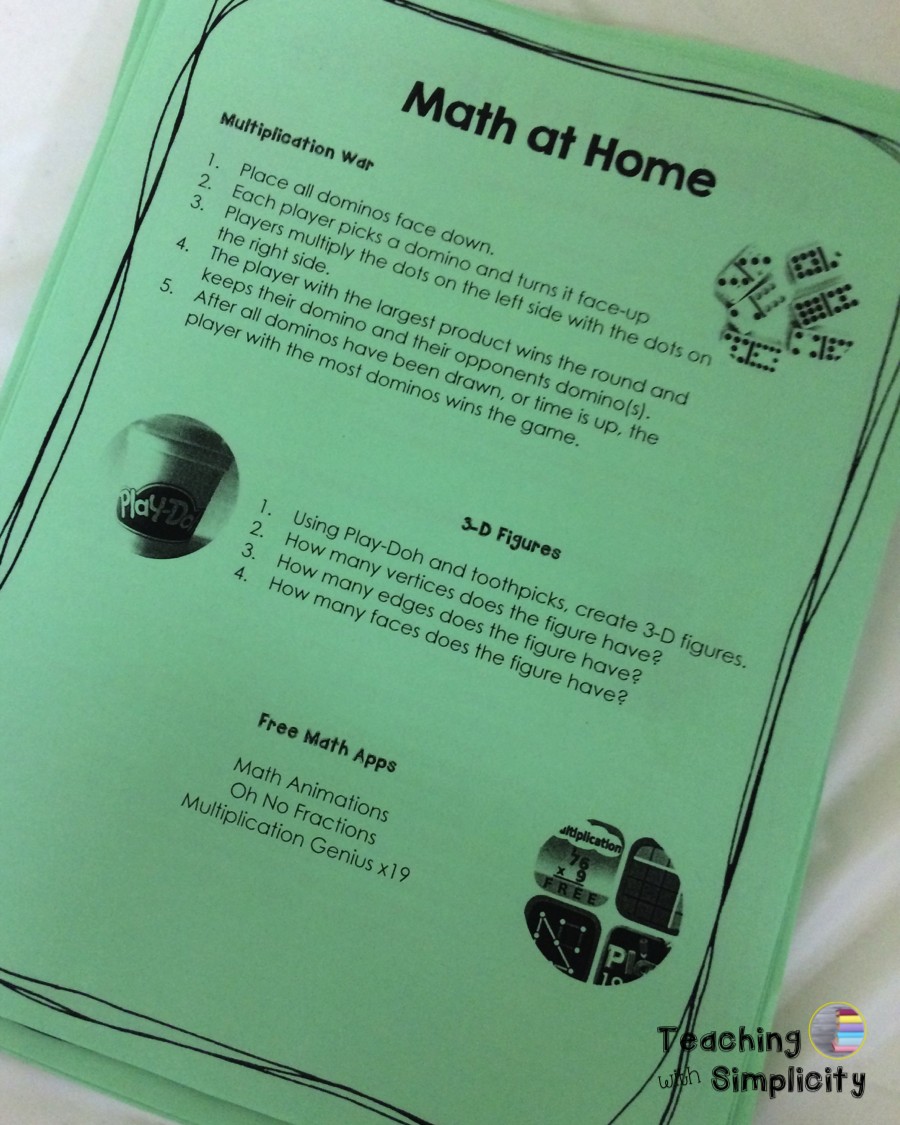 I was absolutely thrilled with how well the night went!  I couldn’t have asked for it to have gone any better, and I’m already thinking about how to improve next year!

You can now download the printables for Family Math Night for Big Kids, HERE, for free!!

If you are looking for literacy night ideas, be sure to check out Lori’s post about on how to organize a successful literacy night. 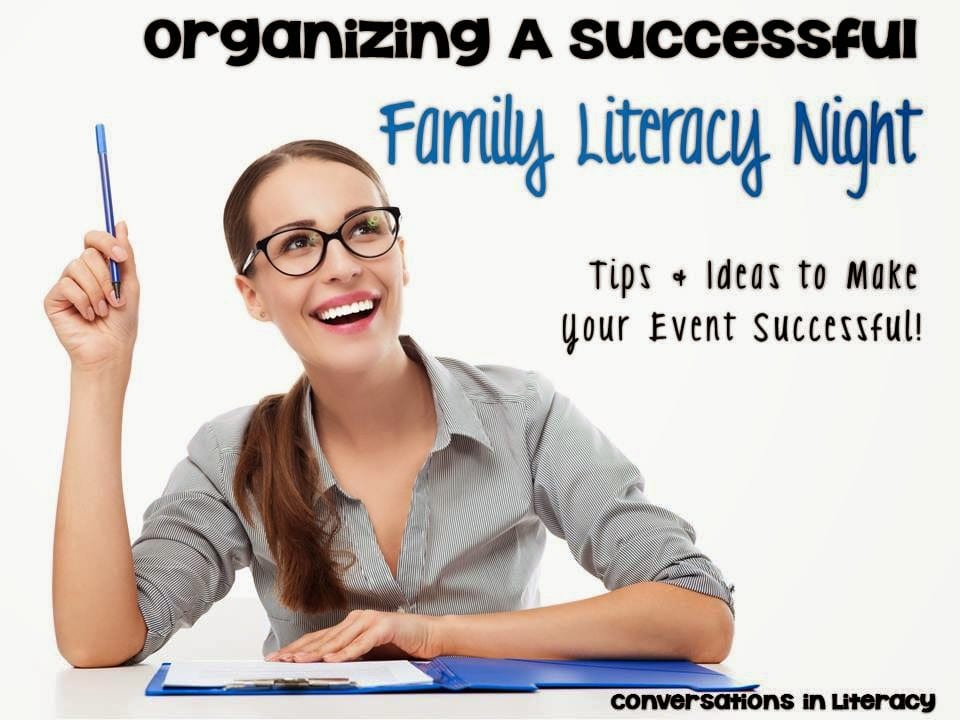 12 End of the Year Ideas